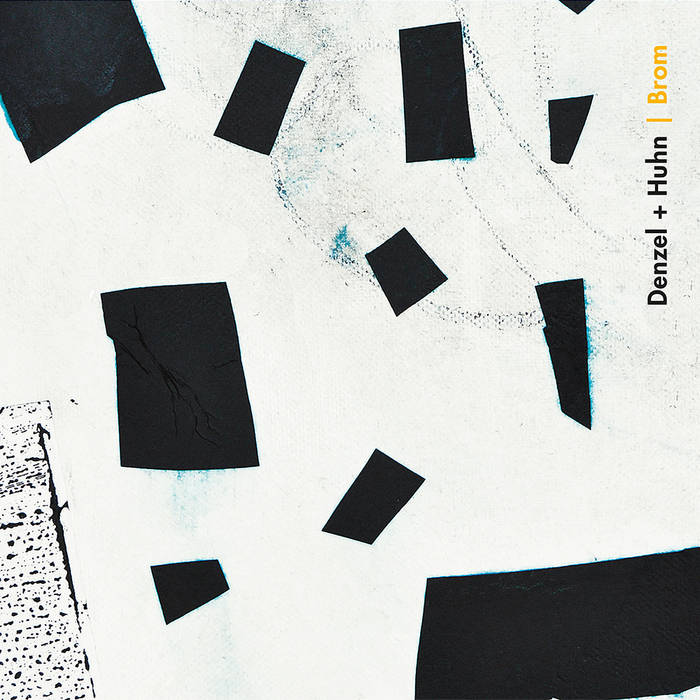 Finn of Tomland This is a sublime exquisite album throughout, not a bad track on it and yet another wonderful release on this very fine label! Favorite track: Deriwat.

Nathan Duin At long last, and well worth the wait. A truly compelling and exceptional record. Favorite track: Pseudo Lull.

Music Won't Save You

"So, the email arrives. "Download Brom". I'm a little scared.

Here's the thing about Denzel + Huhn. They treat sound like nobody else. Everything is precious, worthy to be recorded, archived, digitalized, processed and eventually to be spit out again. On a record like "Brom". Denzel + Huhn's first one since 2007.

I don't remember how we originally met, who introduced us to each other, so let's just assume that we bumped into each other somewhere in Berlin around the millenium change. CDs were exchanged and I immediately liked Bertram Denzel and Erik Huhn, their quirky smiles and their serious ideas about music and frequencies and why all this still mattered while everyone else voluntarily chained themselves to the dancefloor. I was also deeply impressed by Bertram's belt buckle. Serious business. No doubt about it.

I ended up releasing 3 records of Denzel + Huhn on "City Centre Offices", a label I was running at the time together with my good friend Shlom Sviri, who is the man in charge of boomkat.com, one of the best online stores for quality music. You'll find 2 of these records on your favorite streaming or download sites. The first one they released, "Filet", a mini album only available on vinyl, is painfully missing, because we had never secured a digital master. Those were the days.

Some months ago, I met Bertram in front of the supermarket we both frequent on a regular basis. "We've got a new record", he told me and God, was I happy to hear that. For a couple of years, I had bumped into every other month and we'd chat about the world we live in and life in general. Bertram had been busy with music for movies and high-profile TV shows, Erik too, he says, but he wants everybody to know that he bought a new guitar and an valve-powered amp to go with it. So there.

It all makes sense, we'd gotten older, we had things to take care of, discovered new ideas, had gotten rid of old ones. What was missing, was a new record from Denzel + Huhn, music I had always considered to be extremely special, yet more or less completely overlooked by the busy mainstream, unable to cope with their very particular and peculiar approach to music. In other words: Denzel + Huhn are THE SHIT. Put that on Facebook. You'll have my like in no time. #DeHuTheShit if you prefer Twitter.

"Brom" is a very special record. This is why I don’t have time for platitudes like "the experimental duo from Berlin" or "critically acclaimed Oktaf label". That stuff just does not matter. Let’s dive right into it, shall we?

Brom? “The word has a great sound, doesn’t it“, says Erik Huhn. “I also like the fact that it’s an element unable to exist on its own. There is a connection with Denzel + Huhn.“ 2 things have always been extremely important for Erik and Bertram: sampling and collaborating. With each other, but also with other people. This is what happened recording “Brom“ as well, but on a completely new scale. “It’s about new influences and also a new approach towards sound“, Bertram says. “We’d normally start off by sampling tons of records, always looking for bits and pieces to work with. This time, we also started with sampling, but we recorded the stuff ourselves. Instruments, field recordings, experimenting with microphones, looking for a new kind of ambience as a basis for our tracks. We’ve enjoyed this very much, so we were inviting friends to bring their instruments and ideas into the fold.“ Tarwater’s Ronald Lippok is among that crew, but also Brandt Brauer Frick’s Florian Juncker playing the trombone. You’ll also hear many self-made instruments on “Brom“ and the “Hang“, a kind of Swiss-made steel drum with a confusing esoteric heritage. Bringing all this into the mix “the record sounds more mature and complete in a way“, says Bertram.

What really matters is that Denzel + Huhn actually did another record. Maybe their best one yet. Who am I to judge? All I know is that this record indeed matters in a big way, more than you can imagine. Just listen to "Schlagton", the closer of the album, condensing a million centuries of music history into a pop song, 4 minutes and 17 seconds long. If this tune does not provoke tears in your eyes, you're dead. Sorry for being so blunt. The truth sometimes hurts. Trust me, I've learnt this the hard way.

So yeah, in-between trying to catch up with other new records I downloaded "Brom". You should do, too."